Deep tech startups develop groundbreaking technologies with a high impact. Here’s a definition, 25 European startups engaged in the industry, the most active investors.

We are not talking about the genre of music. Deep tech is that set of cutting-edge and disruptive technologies based on scientific discoveries, engineering, mathematics, physics and medicine. New technological applications that can have a profound impact on people’s and society’s lives.

All startups are technological, many are hi-tech, but some are more so than others

Deep technology companies on the other hand, are built on tangible scientific discoveries or engineering innovations. They are trying to solve big issues that really affect the world around them. For example, a new medical device or technique fighting cancer, data analytics to help farmers grow more food, or a clean energy solution trying to lessen the human impact on climate change. Continuing the Uber reference, deep-technology companies in the transportation business would include autonomous vehicles, flying cars or other similar transformative technologies.

What we have come to realize is the fields in deep technology often struggle to find initial funding because of their complex nature. “

Basically, even from the world of investors (especially early stage investors such as business angels) there is often difficulty in understanding the potential of a deep tech startup, because it is difficult to find an investor so specifically competent in a given subject matter that he really understands the innovative technology that the start-up offers. Despite this, investments in deep tech have seen a significant increase in recent years, as shown by the chart below, elaborated by Dealroom for Atomico, in 2017 3.5 billion dollars were invested in 600 deals. 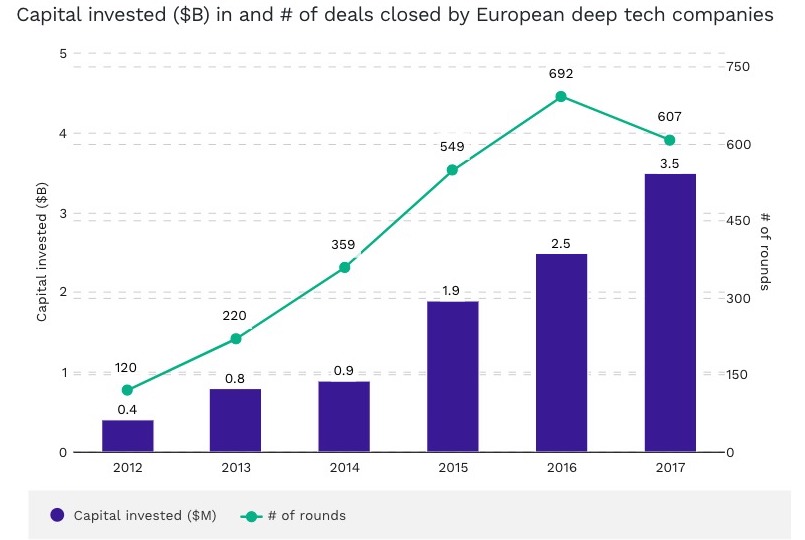 According to a survey by Wavestone, in Europe, since 2015, venture capital (VC) investments in deep tech are growing X3 faster than in the world of B2C tech start-ups, France is in the lead globally in terms of talents, UK leads in Europe in terms of access to finance and investment (in 2017 exceeded by France). 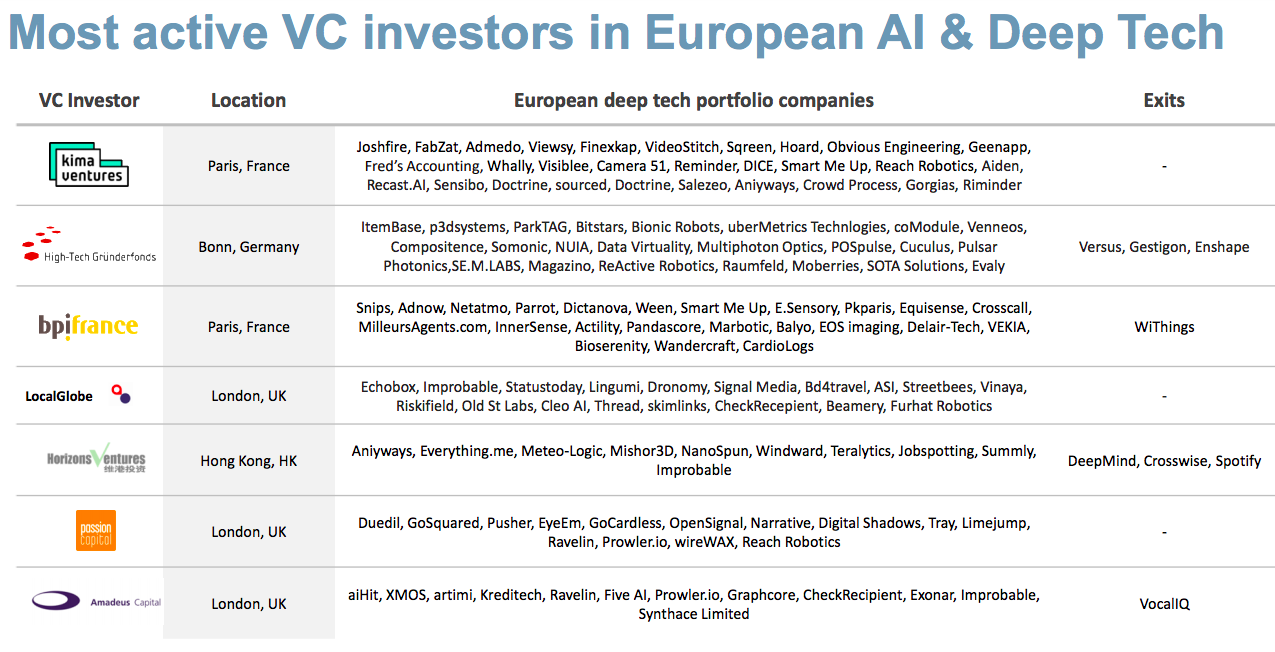 On top, there are notable US corporate venture funds that are putting money in European companies: Intel Apple, Qualcomm, Microsoft Google, Cisco, Amazon. 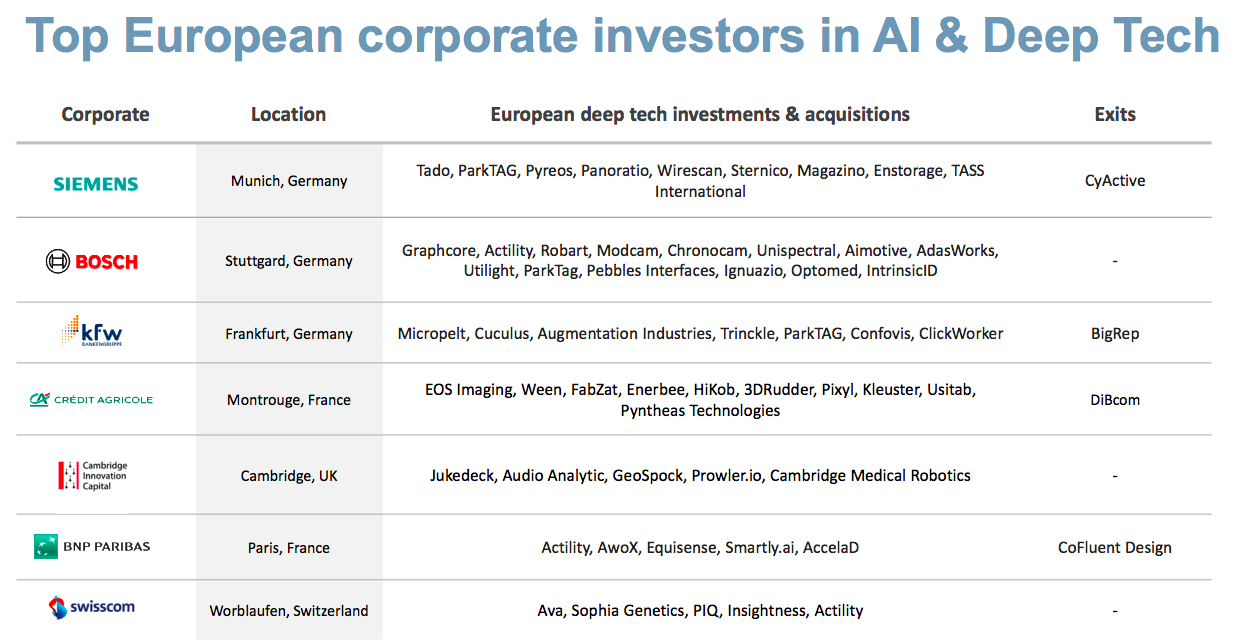 In terms of initiatives, EIT Digital stands out as the only public action that addresses the European startup scenario as a whole. EIT Digital is a European organization aimed at digital innovation and entrepreneurship education. It has created around itself a pan-European ecosystem of over 156 major European companies, SMEs, start-ups, universities and research institutes. It has offices in Berlin, Eindhoven, Helsinki, London, Paris, Stockholm, Trento, as well as in Budapest and Madrid, plus a hub in Silicon Valley. It organizes the EIt Digital Challenge, a unique competition for innovative European deep tech scaleup companies. (here the information to apply for the new edition).

Deep tech startup (only a part …)

Here is our selection of 25 deep tech companies which is certainly not exhaustive, the first 14 are Italian:

Biogenera, is a company operating in the biotechnology pharmaceutical sector, specialising in the research and development of new DNA-based patient-specific biotechnological medicines for the treatment of serious pathologies, like paediatric tumors. Thanks to the exclusive MyGeneraTM platform, BIOGENERA is capable of rapidly identifying and developing new patient-specific medicines aimed at every therapeutic target made up of single mutated genes, considered causative for a pathology.

Bio-on, has developed the world’s first biodegradable plastic in water. In 2017 it presented the new Minerv Biorecovery technology, an unprecedented solution for the bio-oil pollution restoration (oil-bioremediation) because it will allow in about three weeks to naturally eliminate the pollution of hydrocarbons in the environment. marine.

Braincontrol, works on control systems through thought. A technology that allows you to translate the will of a thought into concrete action, a technology that can have many applications but that certainly finds its highest in allowing people with serious physical impediments to interact with the outside world

Cohaerentia has developed a multi-purpose fiber-optic sensor for ‘smart’ diagnostics, with a universal hardware core and software that can be customized according to different predictive maintenance needs.

Chino, offers digital companies operating in the healthcare sector, an API and a secure database to store, share and access sensitive information, in compliance with European data protection regulations.

Empatica has created a revolutionary bracelet to help those suffering from epilepsy, specifically it is able to monitor the most dangerous types of seizures, detect the parameters of the wearer (as activity of the nervous system and body temperature), process the data thanks to AI (Artificial Intelligence) which is equipped and send the alarm on the smartphone of a rescuer if a seizure occurs. In addition, Embrace continuously acquires physiological data of interest for general well-being, monitoring sleep, stress and physical activity.

Genenta Science, is a gene therapy company that develops therapies for the treatment of tumors. The therapeutic approach is based on the engineering of autologous hematopoietic stem cells to express a specific anti-tumor protein in the monocytic / macrophage progeny that infiltrates the tumors. A genetically modified viral vector derived from HIV – Lentivirus – is used as a vehicle of the therapeutic gene in hematopoietic stem cells.

Graphene-XT, has conceived and develops graphene in liquid suspension in water obtained with a patented proprietary process. Thanks to this patented process Graphene-XT can offer a high quality graphene to many industrial sectors of quality at lower costs and reduced environmental impact compared to competitors. In fact, the startup, develops new solutions for companies in the energy, telecommunications, automotive, aerospace sectors.

Greenrail, has created an innovative and sustainable railway crossbar, smart, able to offer better technical, environmental, economic performance compared to the cross beams that are today standard in the sector. The Greenrail cross promises to guarantee a duration of more than 50 years (compared to 30 years for concrete ones), the pulverization of the ballast (the breach lying below the tracks), less vibration and less noise. In addition, it is proposed as sustainable as it uses recycled and smart materials and is designed to generate energy when passing trains.

D-Orbit, has developed a system for the so-called ‘decomissioning’, the programmed and guided re-entry of satellites that would solve (at least in the future) the ‘space junk’ or ‘space debris’ problem, space junk.

Neuron Guard, has developed a prototype thought (Acute Brain Damage) or the types of trauma that seriously damage the brain endangering our lives.

Xsense, develops a new generation of artificial intelligence, based on algorithms able to simulate the non-automatic processes of the human mind. The keystone is the abandonment of the semantic analysis of language in favor of the simulation of human learning. By doing so, Xsense can recognize the role of individual words within a sentence, grasping its most intimate meaning in order to be able to reuse it in terms of context. Xsense can learn concepts and logics in any language.

Cleverciti, provides sensor technology that directs drivers via app to free parking in cities, reducing search traffic and air pollution and improving the quality of life in cities.

trinckle 3D facilitates the entire design process of 3D printed products and significantly reduces the barrier to access to 3D printing with a cloud-based platform.

Lexplore has developed a technology that uses artificial intelligence and machine learning to identify dyslexia in a child already in elementary schools.

OptioPay revolutionizes the way in which people receive money with a platform that allows companies to offer advantageous payment options as high-value gift certificates to their customers.

ApiOmat allows companies to integrate their corporate IT systems with mobile devices and wearable devices, enabling them to quickly create apps that innovate their business.

WhiteLab / Sensio Air has designed an elegant air-analyzer device that targets allergens and pollutants to prevent asthma and its symptoms.

Biocarbon Engineering has developed a system based on the use of drones for planting trees, aimed at rapid reforestation of depleted territories.

Safetynet Technologies has devised devices for the fishing industry and against the impoverishment of fish resources, which relies on the effect of visual stimuli based on light, which can be used in various fish capture processes. The use of these devices allows you to fish only over a certain size.

Lilium, has designed the first electric aircraft in the world that take off and land vertically

Improbable, deals with cloud computing, in particular virtual simulation.The first product of Improbable, SpatialOS, is a distributed operating system for large-scale simulations that integrates with the main game engines. Further potential applications include the simulation of transport infrastructure, telecommunications networks or the behavior of autonomous vehicle fleets.

Roivant, operates in the pharmaceutical sector, proposing an innovative system to systematically reduce the time and costs of the drug development process.

Below is a chart of Dealroom with the highest 2017 investments in deep tech in Europe. 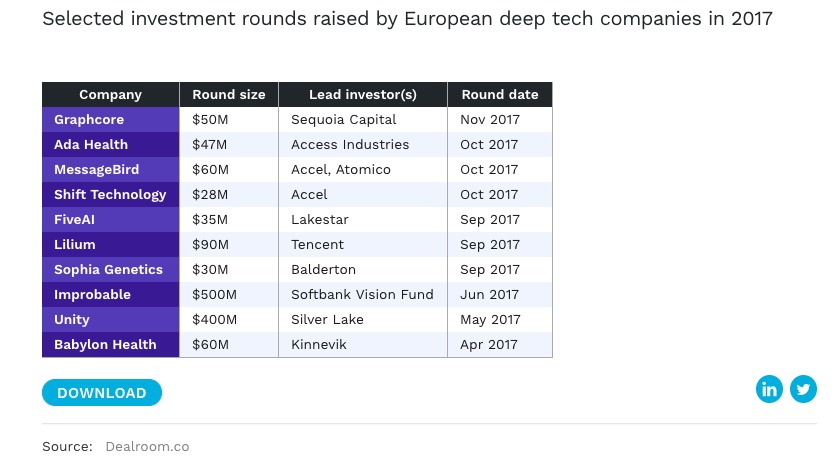