The Italian market of investments in hi-tech startups reached in 2019 the amount of 694 million euros, compared to 593 million euros in 2018, a growth of 17%. More than last year but still not enough.

This is one of the figures of the seventh edition of the report “Hi-tech Startups Observatory Research Results”  of  Osservatorio Startup Hi-tech of School of Management Politecnico di Milano – in collaboration with Italia Startup, the Italian Startups Association – recently released. 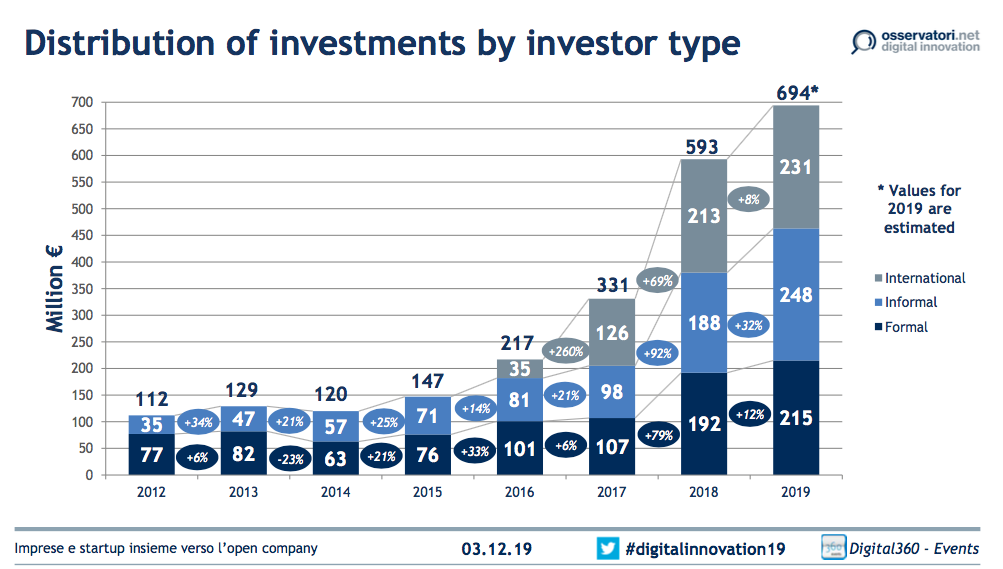 Italy is still a long way from the values of other European countries (Report 2019 Dealroom-Atomico, speaks of the United Kingdom over 11 billion dollars, 5.8 billion Germany, France 4.7 billion, Spain 1.3 billion, Switzerland 1.7 billion) but the trend remains positive, despite the growth appears to be in lower percentage value than last year, when the capital available was almost doubled in twelve months.

The Observatory Report shows in the following graph the distances between Italy and other European countries. 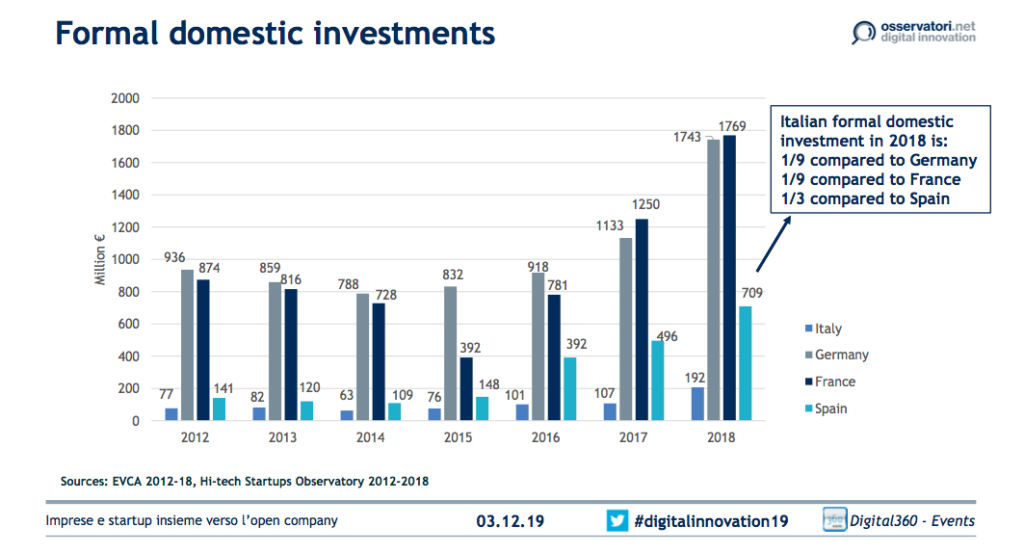 Investments in Italian hi-tech startups in 2019: formal investors account for only 31% of the total

Investment by formal actors is growing at a slower rate (+12%), from 192 million in 2018 to 215 million in 2019, but the injection of this type of fund could only have been postponed. On the one hand, the €1 billion Fondo Nazionale Innovazione (FNI), announced in 2018 but only recently implemented through the appointment of a Board of Directors, has generated a wait-and-see attitude among operators. On the other hand, it is estimated that the European Investment Fund (EIF) has allocated about 1.6 billion euros in the last five years to the Italian ecosystem, a figure not yet necessarily grounded in direct investments to startups.

Another positive note is the active contribution of Cassa Depositi e Prestiti (CDP): some of the details of this progress are the recent creation of the Progress Tech Transfer fund with a budget of 40 million euros, primarily dedicated to environmental sustainability, as well as the creation of the ITATech “fund of funds”.

Investments from informal actors are the first source of financing (36%)

Funding from informal players (Venture Incubator, Family Office, Club Deal, Angel Network, Independent Business Angel, Equity Crowdfunding platforms and companies without a CVC structured fund) shows lower growth than last year, but nevertheless interesting (+32% and in line with the average of +34% recorded each year from 2012 to date), which brings them to reach 248 million euros (compared to 188 in 2018). In a country like Italy, where 66% of wealth is held by 20% of the population, the potential pool of informal investors who leverage their private resources is certainly significant. In this context, an important stimulus came from the Regulator, thanks to the strong incentives promoted by the MISE and linked to the 40% tax deduction on investments in innovative start-ups. Besides, the growing trend of informal investors to group and form syndicate leads to greater confidence and willingness to invest, because it is accompanied by a reduction and sharing of investment risk.

The contribution of Independent Angel and Corporate investments is also not negligible, as it seems that many companies still prefer to act as informal actors rather than structuring themselves through a real Corporate Venture Capital fund. The Corporate sector invested 60 million euros in startups in the first three quarters of 2019, a stable figure compared to 2018 and still driven by a few large operations. To stimulate the structuring and continuity of corporate investments, it will be important, on the one hand, for the management of companies to recover an entrepreneurial culture that sees collaboration with start-ups in a strategic key; on the other hand, the introduction of ad hoc incentives that extend to companies – with the appropriate changes – the tax benefits now enjoyed by individuals.

The role of international investors is at a standstill of 33%

Finally, the international financing component reached 231 million euros, +8% compared to 2018. However, while the figure twelve months ago was “spoiled” by an extraordinary transaction of 100 million, which accounted for 47% of the total, in 2019 we do not observe “outliers” of this magnitude. This shows that as a national entrepreneurial ecosystem, Italy is gradually beginning to attract foreign investment in a more regular and steady manner.