Megatrends, startups, and innovation in the European Sports Tech Ecosystem

This is the second article by Trentino Sviluppo – Area Marketing Strategico (progetto Cluster Sport) to explore how the world of the sports industry is evolving and innovating thru technology and new business models. The first one is here.

Sports Business, in general, is witnessing a systemic general growth. The European football market alone is considered to be worth over 25 billion Euro in 2019 (Deloitte). But what are the trends (or the Megatrends) in the European Sports Tech Ecosystem? We take a look at the major and most authoritative reports and take a glimpse into the world of startups in order to understand which trends will disrupt and dominate in the years to come.

We, at Trentino Sviluppo, are currently monitoring these evolutions with web-seminars like “Innovation and Business Development in Sports” and “Digital Transformation” – but also with increasing literature of the field.

GSIC, the Global Sports Innovation Centre powered by Microsoft, articulates strategically a vision: “Digital Transformation of the sports industry in 2025: Envisioning the future”. According to this multi-stakeholders’ vision, technology will shape the future of the sports industry and its redefinition towards sportainment (in other words, the merging of sport with entertainment); the speed at which the sport actors will adapt will influence winners (and losers) in the digital transformation battle; tracking, interpreting and investing in shifting consumers behavior will determine the evolution of the game and smart stadia; personalized data and the individual necessities of different players will demonstrate that no “one-size-fits-all” exists and – sometimes – legal frameworks, governing bodies and (some) traditional sports are lagging behind.

Deloitte’s sports industry starting lineup describes exactly the “trends expected to disrupt and dominate 2019”. In this regard, we saw the streaming media options proliferating and improving in quality (from the development of DAZN to the launch of ESPN+) and an increase in players’ activism transcending the sport landscape and touching the landscape of social and political actions (particularly in the US). But some trends are spotted like the colossal speed in which Augmented Reality and Virtual Reality – but also personalized fan engagement through data and Big Data – are entering into the game of sport.

“Sports Industry: lost in translation – PwC’s Sport Survey 2018” echoes this market sentiments: if we look at the state of the sport industry, the market growth – forecasted at 7% – is stable but optimism is key in Asia (less so in Europe); sports tech firms are the drivers of optimism, but traditional broadcasters and leagues less so; digital transformation is revolutionizing the landscape of sport (digital-first is fundamental, but there is no consensus on the future model, uncertainty on the future persists and the shifts in consumer behavior are an essential variable of the equation).

In order to grasp the challenges of the World of Sport, it suffices to read the list of “Future of Global Sport” by the Association of Summer Olympic International Federations (ASOIF): changing consumption behaviors, engaging the modern fan, digital transformation (especially for the media), evolution of sponsorship, esports as a means to engage younger fans, staging mega-events, athlete autonomy, private investment and public sector involvement in sports, governance and integrity of sport.

As the ASOIF suggests “over the last few years, the fast development of new media technologies and changes in consumer behavior have brought significant change to the world of sport. Overall, the sector has experienced strong growth and is estimated to be worth 169.4 billion $ by market value in 2019 (a 37% increase on the 2012 figure of 123.7 billion $). Sponsorship is the lion’s share with 66 billion $, followed by gate and media rights revenues (both at 46.8 billion $) and then merchandising, which is forecast to growth at 20.8 billion $ (see PwC analysis)”.

We have a map – and the map is called “European Sports Tech Report 2019” (ESTR). In other words, if we look at the world of startups, we might have a first glimpse into the future of the sport. At its second edition, the report highlights and illuminates the driving factors of the European Sports Tech Ecosystem – as the name of the report suggests.

The ESTR emphasizes that:

Innovation, however, remains – at the same time – the most elusive and the most strategic elements in the world today. There are maps of innovation (and below we present you with the one developed by SportsTechX on the Accelerator & Incubator Programs in Europe for the Sports Ecosystem), but there is not a clear and single path to innovation. 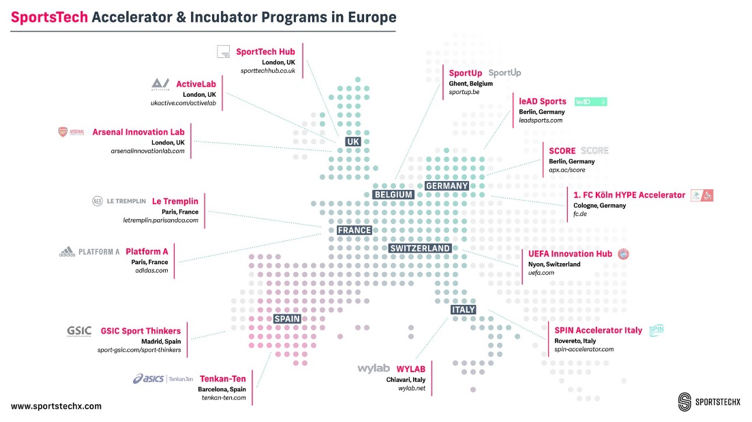 We need to distinguish the macro-megatrends from the micro-entrepreneurial opportunities for business development. As the reports quoted here illustrate, there are plenty of opportunities for the future. However, not all innovation, not all startups, and not all megatrends will lead to success. “In theory, there is no difference between theory and practice. In practice there is”.

Who will be the fast fishes in the “Fourth Industrial Revolution”? You can make your bets…information asymmetries will remain, but information and dexterity will be crucial determinants for any actor, both in the digital and in the real world. Also in the Sports Tech Ecosystem, which is resilient – but not an island isolated from accelerating digital transformation, shifting consumer behavior and strategic choices by individual actors.